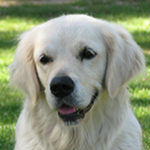 A Champion at 20 months.

Hollywood produced a most successful litter from “Scout” Grand Ch. Perrecca Justa Boy Scout, while there were only two puppies in that litter we kept Angel.  Hollywood is therefore Grandmother to Champions – The Pan, Orion & Dante

Hollywood has since passed away.