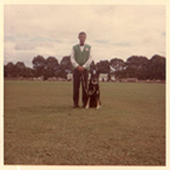 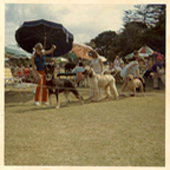 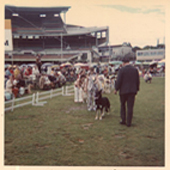 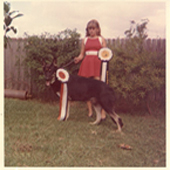 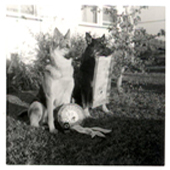 Dockal Tristan C.D.X. and Tanaba Minka C.D. showing off their wins after a GSDL Specialty Show

Many people ask Erica and I how we got started in the dog world. This page gives our visitors a little bit of history.

In 1970 my parents purchased a black German Shepherd puppy “Dockal Tristan.” Not a kennel name you will see today. Tristan was sired by Ch. Tanaba Tanhausser C.D.X. “Strauss” owned by Max and Fay Stokes, bred by Tom & George Briggs.

As fate would have it Max and Fay wanted to see Tristan and they convinced my non-show dog parents to show this little boy. About 2 months into the show ring my father lost the top of 3 fingers in an industrial accident and obviously couldn’t show our puppy. So at 13 years old, I was thrust into the show ring. That day Tristan won in a class of 6, and won his opposite. Back then black shepherds were not popular with judges and shepherd entries at shows were large.

It didn’t take too long before I entered the junior showmanship classes. Tristan became my handler dog and I was soon known as the “little girl with the black shepherd.” It took a while before I finally succeeded in the handler classes with my first win at St. George Kennel Club Championship Show on 17th April, 1971.

Mum & Dad encouraged me to enter the “Inaugural” Pal International Dog Show, Handler Class now known as the Spring Fair. In this class I was successful in being placed 2nd. You can imagine how proud I was when in 2007 my daughter Erica won that same class.

My parents, Bob & Rona Jones were office bearers in the German Shepherd Dog League for some years. Dad holding Show Manager position and mum holding Cumberland Branch Secretary. At this time I was the youngest instructor in the GSDL.

I married in 1977 and was given a male puppy, “Bronson” as a wedding present. Not long after, dad died of cancer. It was for me, the end of special time and I turned my attention to family and career.

I believe once something is in your blood it’s there to stay. So it was no surprise to my family after the birth of my 4th child, I needed a puppy!! Along came Minka – a beautiful golden retriever who was a wonderful family pet. In 1998 Minka delivered a litter of which we kept Merlin, the first BlueBreeze litter.

It took a little more time however before I re-entered the show ring. I purchased a puppy – Japorik Princess Monarco, bred by Tony Saunders & Rika Yoshino. At her first show she won a 3rd place, I was proud as punch as Erica & I drove home with our little yellow ribbon. At Monarco’s second show, she won Best Baby Puppy in Group. That was it – I was hooked, again!!

My next show golden was Dykinta Shades O Gold, bred by Wendy Atkins. Topaz became our first Champion. The rest of story, really, is in the website pages.

We hope you enjoyed reading “this little bit of history.” 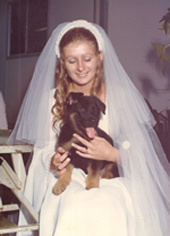 Debra on her wedding day, 26th February 1977 with Bronson a gift from Patricia Bayley (Koonski Kennels)