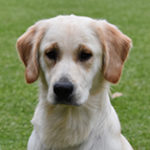 Tuppence – by the time she left Puppy Class she was already half way to becoming an Australian Champion!!

Tuppence & her litter mates had a “Pirate” theme to their naming.  “Nine Pieces O Eight” is a term taken from the movie “Pirates of the Caribbean – At Worlds End”.  A Piece of Eight is a Silver Spanish coin.  In the movie the Pirate Lords needed 9 of these Silver coins to release Calypso from her human bonds.