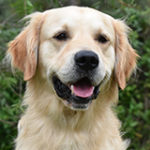 Quest & his litter mates had a 14th Century Scottish theme.  “The Saltire” is the Scottish Flag and “The Legend” behind the flag is about the Quest for William Wallace & Robert The Bruce (King of Scotland) to free the Scottish people from the tyranny of the English King.

Quest is a proven sire and is available at stud.