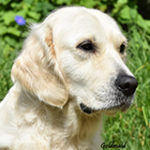 Cleo was such a gorgeous puppy at 6 weeks I felt she should be on the cover of a magazine.  So she was named “Cover Girl.”

Cleo has a fantastic show career, capturing they eye of many breed specialist & international judges.  She has been highly awarded at both all breeds and specialty shows.